Summer is SO not over

Contrary to popular opinion, just because school has started, summer is not over. Technically, the last day of summer (this year) is September 23, the day of the autumn equinox.

Personally, though, I gauge the end of summer by two simple facts:

1.) It’s too cold to swim outdoors. Granted, I like to swim in chillier temps and chillier water than most people, but hey, if the Twin Lakes folks will let me in the water, I’m there. (This was a lot easier when the local pool kept its gates open until Labor Day, which has been the routine as long as I can remember. But this year, for some silly reason, they closed on August 20. Still scratching my head over that one.)

2.) I can no longer wear short skirts and sandals to work or shorts and flip flops after work.

That’s it. When those two things are no longer possible, summer has officially ended. At which time, I will fall into a deep depression and dream of meltingly hot, humid days when nothing feels better than jumping into cold water. Ideally, I would live much farther south but that’ll have to wait until retirement. At which time, I plan to move to a hut on the beach. First, though, I have to convince my husband to move with me. If not….I guess we’ll have to compromise.

In the meantime, I’ll stretch summer just as looooooonnnnnggg as possible. For those of you who disagree and are convinced summer is gone, go ahead — put away your swimsuits and get out your winter coats. I’ll catch up with you later. I’m headed for the water…… 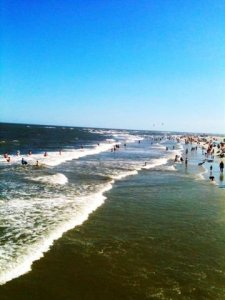 This entry was posted in Uncategorized. Bookmark the permalink.

2 responses to “Summer is SO not over”