It is true that time dulls the memory. Once the kids leave home for college, we quickly forget the shoes strewn around the house, the backpacks covering the couch, iPods plugged into various outlets, and the Lego piles left in a corner. Well, the Lego sets really disappeared much earlier than the shoes, backpacks and iPods, but you get the picture.

A few months later they pop in for Thanksgiving break and new items appear in random piles around the house, only to disappear a few days later when off their owners head off again. Eventually, they move on to their own homes and somewhere along the way, learn to deal with their own piles of stuff.

What I didn’t realize was that a 15-pound four-legged creature can manage to make more of a ruckus that two teenagers can. Most days I return from work and pick my way carefully through what looks like a war zone.

The first clue is a path of bits of stuffing that, when followed, lead one to the little mutt’s favorite half-stuffed (or is half-unstuffed), one-legged lavendar bear. Although, at this stage, what was once a bear resembles not much more than a mostly chewed-up piece of fabric.

Nearby is the missing leg, which has oddly become a favorite toy of the aforementioned mutt, more formally known as Ike, the mini Schnauzer.

Lest you think I’m exaggerating, here is a photo lineup of the ravaged toys….all leading to the furry culprit, digging through his toy box for yet another well-chewed favorite. 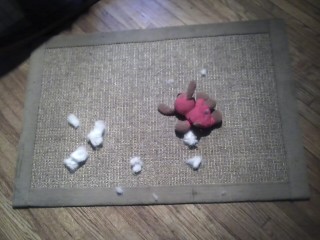 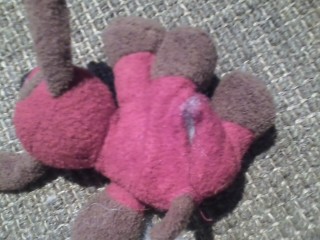 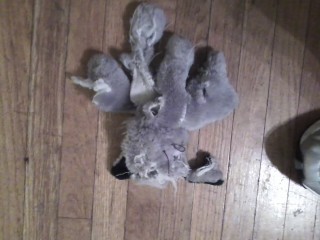 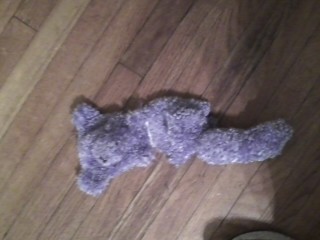 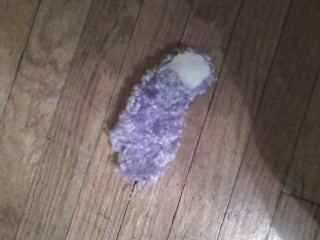 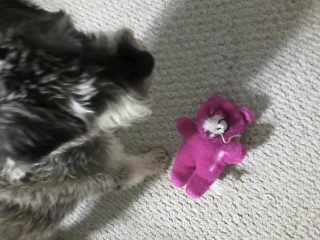 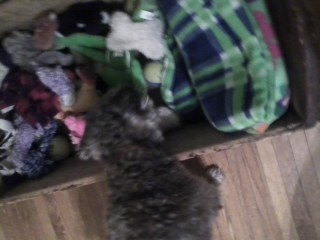