Hunting for snakes, good veggies, and a good book

Whyizzit I never have my camera with me when the good stuff happens? A few days ago, I stopped to sit on the rocks at the National (see photo). There was a snake vertical in the water…just treading away…staring up at me. Little fish were swimming around him. I figured he’d snap them right up, but he was more interested in staring at me.

This morning I trekked back down to the rocks but there was no snake. Too bad. Still, it was worth the walk because that spot is SO peaceful early in the morning. Sometimes if I shut my eyes I can pretend I’m sitting on the Back River beach on Tybee Island. 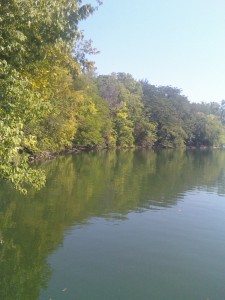 National Quarry in Bluffton, Ohio (known to some as Cobb Lake)

Today, though, when I shut my eyes, I kept thinking about the snake and suddenly had a vision of Ray Ruggley, one-time manager of the local pool. This was when the kids were little and we were still swimming in the quarry by the old swimming pool. There were often water snakes nearby. One day Ray jumped in, grabbed the snake and flung it far across the water away from the high dive. It got a lot of whoops out of the kids.

That memory stayed with me all the way home — just a bit nostalgic since I can’t wait to be able to swim again.

Since the snake hunting was unsuccessful, I figured I’d have more luck with fresh produce hunting today. Woke up the happily sleeping daughter, grabbed a bunch of bags and headed to the farmer’s market. First distraction for the daughter  — an unusual echinacea plant with orange and pink blooms. Picked up cukes, broccoli, grape tomatoes, melon, bread from the French guy, peppers, and green beans. No blue eggs — boo. Second distraction for Lindsay – a savory mint plant.

On to the library, where we have paid enough overdue fines over the years to have stocked them in toilet paper indefinitely. Picked up a chocoholic murder mystery, which will certainly require eating good dark chocolate while reading, some magazines, and an audio book (an old and familiar Janet Evanovich, but which still provides humor on a long drive.)

So…as far as hunting, I’m two for three this morning. Not bad for a Saturday morning.