Three men and a lawnmower

Guess what happens when you pair a nurse anesthetist, a lawyer, and a journalist with a lawnmower whose adjustable wheels have a mind of their own. Surgery.

I’m serious. I know this because I witnessed this in action. One minute, there’s said journalist happily trotting around the backyard, creating neat rows of mowed grass.  The next minute? Silence. No mower engine to be heard.

At first, I ignored the silence. After all, I was busily working away in my sewing room, hoping the funny sounds from my serger didn’t mean another trip to the fix-it shop. Besides, the mower started back up pretty quickly. And stopped again just as quickly.

After about 10 minutes of these fitful stops and starts, I peeked out the window. There were the journalist and the lawyer crouched over the now-silent and upturned mower. A few minutes later, the nurse anesthetist  — black bag in hand — joined them.

Here’s the problem. My little voice told me to stay out of this. But then, I’ve never been very good at listening to my little voice. By the time I got outside, the three of them were on their way to the anesthetist’s shop where, they informed me, they would be performing some sort of surgery on the wheel lever.

At first, there were just two heads bent over the mower…. 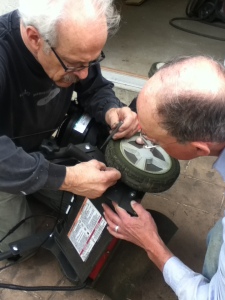 …and then there were three….

And then somehow, as if by magic, the surgery was over and the journalist happily trotted off to level off the grass. The other two? Deliriously happy at having been able to perform a successful procedure, they retreated to their respective shops to take on the next project.

The journalist is a lucky guy to have two such good friends with mechanical expertise.