The curse of the Mother’s Day plant

Last Sunday, the rain let up just enough that I decided it was time to do some planting. Despite a hankering for a new high-rise raised bed, I’d decided instead to do mostly container gardening. Having done this successfully several years ago, and bolstered by an article posted on the Stratton Greenhouses Facebook page, I headed out to the playhouse.

Okay,technically this is no longer a playhouse, but since I like to play in the garden, we still call it that. My dad built this A-frame “cottage” about 18 years ago, intending it as a playhouse for the girls. He told me we’d be lucky if it lasted for two years, but since my dad never did anything halfway or shoddy, it still stands.

Anyway, the toys housed inside have been replaced by gardening tools and equipment, pots of all sizes, bags of potting soil, and assorted spiders and bugs. So…Sunday, I shoved aside the spiders standing guard at the door and grabbed four big clay pots and a bag of potting soil.

This was to be an early planting of succession crops (I made that up to sound like I know what I’m talking about). In one pot went mesclun (a “gourmet” blend of greens, and in another pot I planted spinach. Then because I wanted to compare the success of basil grown in a pot versus that grown in my herb garden, I plopped some basil seed in the third pot. In the fourth pot, I mixed a handful of year-old buttercrunch with spinach. 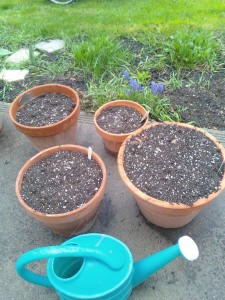 Despite the fact that it was likely to rain within a few hours, I dutifully sprinkled water over the four pots. In the back of mind, a niggling voice festered. “Maybe you should put screens over the pots….just in case.” Since I’m so good at ignoring little voices I took some pictures of my pots and pleased as punch, went into the house to announce the start of my 2011 garden.

The next day, I was talking to my youngest daughter on the cell phone as I walked home from work. As I approached the patio, I excitedly told her about the plantings. My happiness suddenly turned to howls as I realized one of those wretched squirrels had decided to feed on my newly planted seed.

Her response? “Mom, it’s the curse of the Mother’s Day plant. Remember?”

Oh, how I remember. Long ago, when she was about six years old, she’d planted a flower in a tiny pot at school and brought it home to give me for Mother’s Day. She and her dad had hidden it in the garage, locked the door, and forbade me to enter the garage. They forgot to tell that to the furry creature hidden somewhere in the dark recesses of the garage.

The next morning, the two of them sneaked out to the garage. There was a loud scream, followed by angry cries of frustration. Somehow, they’d unknowingly locked a raccoon inside the garage and he seemed to think that flower was his breakfast.

I honestly think if the raccoon had hung around, Anne would have grabbed the nearest shovel and smacked it.

It was Anne’s version of Judith Viorst’s “Alexander and the Terrible, Horrible, No Good Very Bad Day.” A Mother’s Day I’ve never forgotten.

Twenty years later, she’s obviously still hanging on to her memory of that day, but with a humorous twist. And so…there you have it…the curse of the Mother’s Day plant. Guess I’ll have to wait until after Mother’s Day to re-plant.