Our 1997 Dodge Caravan had survived nearly 15 years of life with nary a scratch on its exterior. Its bright, shiny, red paint belied its age. But look inside and the picture changes a bit.

The gray upholstery and carpet are showing signs of wear and tear, as are its innards — a second transmission, third set of tires, and so many serpentine belts that we have single-handedly financed the retirement of the CEO of whatever parts company makes the belts.

Years of travel with two teenaged drivers should have produced some dings along the way, but the only major trauma during their years at home occurred when the hubs and daughter number two were returning from her job at Stratton Greenhouses. Their version of the story was “The deer just came out of nowhere, just dropped from the sky.” Said deer left the van totaled, but the good body doc fixed it up right as new.

As the girls moved on to Athens and Bowling Green, then Kent and Cincinnati, the Caravan morphed into a moving van. Still…no dents.

But, as so often is the case with cars, fate interferes.  I’ve learned not to question these things…acceptance is best.

But…sigh…there are now two rather hefty dents on each rear side panels of the van. Both show signs of having collided with something painted white. Well, hey, at least it’s evenly dented.

As I understand it, here’s how this little scenario played out.

First, while the hubs was removing the middle and rear seats from the van (preparing it for yet another moving spree), one of the seats tipped over and smacked one of the rear lights.

A few days later, wearing his Chamber CEO hat, the hubs was —  as he puts it —  working “in the line of duty,” delivering signs to the Christmas lighting contest winners. It was dark and he backed over a post holding two mailboxes. 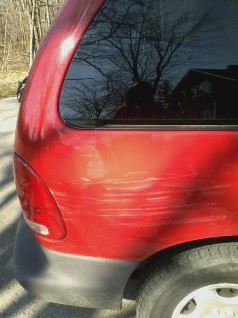 Lest you accuse him of a federal offense (which it is), rest assured, he reported it immediately to the owners and our insurance agent.

In a burst of insight, he pointed out that his procrastination in repairing the broken rear light saved us $70 because it most certainly would have been smooshed again in the mailbox fiasco.

Perhaps a month later, the van was parked on the street in front of our house when someone backed into the other rear panel, producing the matching dent. Said offender was remorseful and offered to pay for repairs. Why bother? Then we’d have to fix both sides. 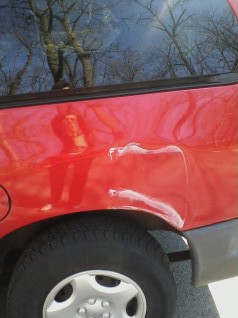 At 15 years of age and showing 156,000 miles on the odometer, Big Red is showing signs of age. Most days when we start it up, the dashboard no longer lights up. But one smack to the top of the dash, and up come the lights.

It’s cranky in the cold, squeaky in the heat. The heat only begins to blast warm air after we’ve driven an hour or so. The air conditioning? Nada.

But hey, Big Red is part of the family. We won’t put it out to pasture until Gary Kirtland and Jim Kinn pronounce it hopeless. And those big dents? Like age spots, you can try to hide them, but why bother?