Bring on the (new) bread machine

Well. We’ve managed to destroy yet another bread machine. Here’s the thing. Some people eat cold cereal for breakfast. Some eat eggs. Some eat nothing. I eat cinnamon raisin bread — NOT the store-bought spongy, flaccid stuff — only homemade.

Somewhere in the mid-80s, we purchased our first bread machine. Made by  DAK, it resembled R2D2 and made round loaves. Our two then-preschool-age daughters watched, mesmerized, as the dough mixed, began to rise, and baked. One day, it became off-kilter mid-cycle and walked right off the counter and crashed to the floor. Thus began a long line of bread machines. I forget how many we’ve had because like our toasters and irons — they have short lives.

So…a few months ago, the most recent machine died. Mid-cycle. This was not pleasant. My attempts at completing the baking process were useless. We ended up with a half-baked lump of dough. Still, I loved that particular machine and set about buying another one. I couldn’t find the same model nearby so settled for another. My first clue that it might be a dud was when I noticed the pan didn’t click into place when I set it in the machine. I was sure it was a dud when nothing happened after filling it with flour, cinnamon, oil, honey, salt, water and yeast.

After a few choice words, which my husband appeared to ignore, I kneaded it by hand, let it rise, and baked it in the oven. And…returned the machine to the store.

I know. I should have ordered a new one right away but decided instead that I’d drag out my 30-year-old Cuisinart, mix up the dough, and bake it. That has worked fine when/if time allows, but I’d become accustomed to baking it on the one-hour cycle while I run — thus, having fresh bread whenever we’re out.

So, okay. I give. The trusty Cuisinart didn’t let me down today — odd, when you consider the number of other appliances we’ve seen come and go. Given my tendency toward pessimism, I know it’s not going to last. And yes, I know I can mix it up by hand and bake it. But not while I’m running.

So…that’s it. I give. Bring on the next bread machine. May you live as long as (shhhh…) the Cuisinart and the 30-plus-year-old clothes dryer.

Three men and a lawnmower

Guess what happens when you pair a nurse anesthetist, a lawyer, and a journalist with a lawnmower whose adjustable wheels have a mind of their own. Surgery.

I’m serious. I know this because I witnessed this in action. One minute, there’s said journalist happily trotting around the backyard, creating neat rows of mowed grass.  The next minute? Silence. No mower engine to be heard.

At first, I ignored the silence. After all, I was busily working away in my sewing room, hoping the funny sounds from my serger didn’t mean another trip to the fix-it shop. Besides, the mower started back up pretty quickly. And stopped again just as quickly.

After about 10 minutes of these fitful stops and starts, I peeked out the window. There were the journalist and the lawyer crouched over the now-silent and upturned mower. A few minutes later, the nurse anesthetist  — black bag in hand — joined them.

Here’s the problem. My little voice told me to stay out of this. But then, I’ve never been very good at listening to my little voice. By the time I got outside, the three of them were on their way to the anesthetist’s shop where, they informed me, they would be performing some sort of surgery on the wheel lever.

At first, there were just two heads bent over the mower….

…and then there were three….

And then somehow, as if by magic, the surgery was over and the journalist happily trotted off to level off the grass. The other two? Deliriously happy at having been able to perform a successful procedure, they retreated to their respective shops to take on the next project.

The journalist is a lucky guy to have two such good friends with mechanical expertise.

Finding beauty in an dreary week of February

January and I don’t get along. Let’s just say I’m SO glad when February arrives because at least there is Valentine’s Day to celebrate and then you’re halfway through the month!

But okay. Enough is enough. It’s time for February to morph into March. It’s the time of year when we’re ready for something…anything…that suggests a possibility that spring isn’t so far away. Let’s just say the last few weeks in our part of Ohio have been — for the most part — dreary, cold and wet, with a few beautifully sunny days to whet our appetites for better weather.
A stroll through the back yard revealed some highlights…my favorite was the parsley that survived the winter underneath the snow. And then there were these beauties:

The green tips of spring flowers poking their heads up through the ground.

Forsythia buds — time to cut a few to bring inside to force for early yellow color!

In the midst of searching for spring, it occurred to  me that I should be able to find some beauty in the ordinary, so I began looking for unusual plants, grasses and pretty berries. The local florists will never have to worry about me horning in on their business. But channeling my late mother-in–law, who could make the most straggly stems appear beautiful, here’s what I came up with. Not bad, eh? 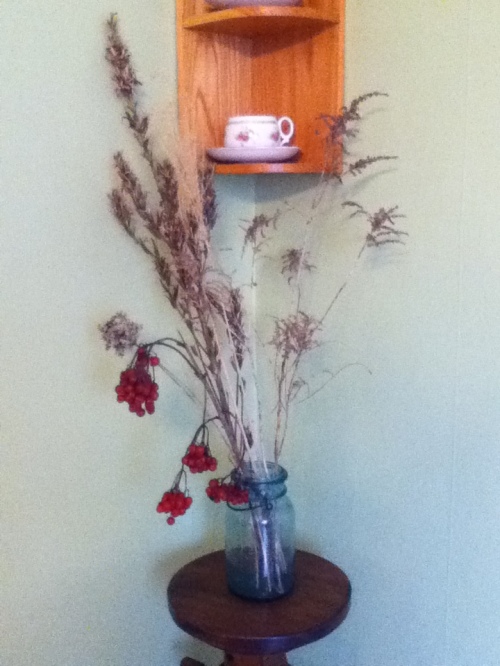 Here’s the thing. In 1990, my parents returned from Switzerland with five cuckoo clocks — one for each of their children. These are the typical carved clocks that are pendulum-regulated and (supposedly) strike the hours with a sound like a cuckoo’s call and has a miniature cuckoo that pops out from his little door with each note.

“Supposedly” is the key word here. Ours hasn’t worked for years and I’m pretty sure that’s true of my brothers’ clocks. In fact, one of them put it back  in the box when it stopped working. We’ve taken ours to two competent clock repair shops. The word is that cuckoo clocks are very difficult (read: expensive) to repair.

So for years, our has just hung in the living room for decorative purposes. A few years ago..one day…out of nowhere…the little bird popped out and said “cuckoo.”  I was so stunned I just stared at it for a long time before calling my husband. It did the same thing months later but until today has been silent.

Today, my husband and I were telling a friend the saga of the cuckoo clock. At the same time, I’d been dusting the clock when suddenly the little bird popped out and chirped his little tune. In stunned silence, we watched it pop right back inside its little hole, pulling the door shut.

Suddenly, we realized it was also ticking — a first in a long time despite the fact that we pull the chains regularly. But today it wasn’t finished.

Fifteen minutes later, at the top of the hour, the little guy popped out again and chirped four times to indicate the hour. Of course, it was really only 1:30 p.m., but the clock was off and how would the cuckoo know that? Later in the day, we reset it and hours later, it is still chirping away every 15 minutes.

To prove to our daughters and my brothers that the clock is working again, we videotaped it. Shortest video on record, but you get the idea. The question is…what happened? Did I actually remove a piece of dust that was in the way of the clock mechanism?

I do know this much. Miss Clavel was right.

The good thing about any renovation project is that eventually there will be completion. Truth be told, there are days when you doubt that. But at last, we’re finally seeing the light at the end of the proverbial tunnel. All the ripping up, tearing out, sanding, staining and varnishing is done. Still need to add some trim but that’s small stuff compared to the hours we’ve compared to the hours we’ve put in over the last few months.
And so…a pictorial blog… 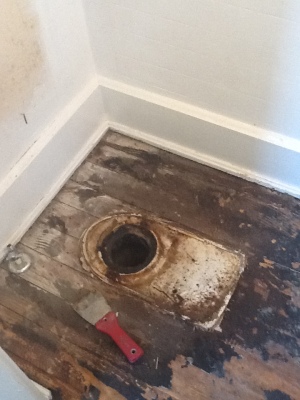 We live in an old house. Old as in at least 90 years old. Maybe older. Here’s the thing about an old house. It’s old. Things go wrong. Things need to be fixed. While this is probably also true of new houses, I’ve never lived in one so I have what might be considered a convoluted vision of perfect living spaces. New pipes. Reliable heat. Bright, shiny faucets.

So anyway, one week ago things fell apart. It’s never just one thing…in this case, there were two.

Here’s how this scenario played out. Friday night, as we were cleaning the house, I heard the hubs groan and mumble something from the basement. It didn’t sound good. It wasn’t. The original (read: old) cast iron sewage line from the toilets, shower and bathroom sinks, had sprung a leak.

Fortunately, there is a nearby drain. Unfortunately, the drain had backed up and it wasn’t pretty. So we mopped up the mess and sent an SOS to our favorite plumber. The on-call employee and his lucky wife stopped by after their dinner out. He gave us his evaluation of what was going on and what we could do, which basically came down to flushing the toilets and taking showers only when necessary. Oh, and keep a mop and bucket nearby.  Until Monday…

Because on Monday, the same plumbing/heating company was installing our new furnace and could then determine how best to fix the pipe/drain problem. In the meantime…

We took care flushing only when necessary. At one point, the hubs announced he was running up to the town hall — I assumed he needed to pick up something from his office. But no. There’s a nice restroom there…with working toilets.

Saturday evening, instead of our planned sushi birthday celebration, we stayed home to clean up yet another flooding. Too many showers at once had overwhelmed the drain. Sunday was more of the same, although we’d learned our lesson. No more back to back showers.

Monday morning, the hubs headed off for Cincinnati at 5 a.m., while I waited impatiently for 6 a.m. so I could head to the gym. Not only is there an indoor running track which saved me from a drenching run in a cold rain, but there are also hot showers and working toilets!

After three days of this, one’s brain gets stuck on one reality of life. Where is the nearest bathroom? And yes, I did think of all of those affected by recent natural disasters and realized how lucky I was to have alternatives.

And yet….home alone Monday night, having heard the various possibilities of what could be causing the blocked drain, dollar signs flashed through my mind…a veritable slot machine racking up the possibilities.

Things only worsened when another round of flooding drew me back with my mop and bucket, only to slip and fall in the mucky water. That was it. Time to take drastic measures. Recalling how we used a large coffee can when restrooms were unavailable during a trip through France and Switzerland, I lined a bucket with trash bags and headed to bed, sleeping fitfully. Let’s just say the bucket came in handy.

Tuesday arrived and with it, an angel in the form of the plumber. I was happy to go to work and let him deal with the mess. Good old-fashioned ingenuity and some plumbing knowledge fixed the problem…at least for now.

And now my dreams are filled with visions of new houses. New pipes. No need for drains. Some day.